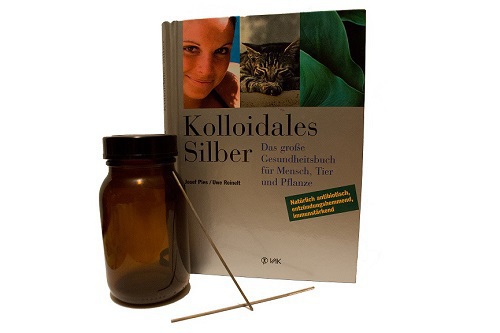 Even known from the Roman era, silver inhibits the growth of germs and acts like an antibiotic, only without any side effects..
Silver has a germicidal effect in all forms (ions, atoms, particles) directly or indirectly.
The tiny silver molecules penetrate into all unicellous parasites such as bacteria, viruses and fungi and their spores and stifle them by blocking an enzyme responsible for oxygen production. The metabolism of the parasites thus comes to a standstill, and they die off.
No bacterium is known which is not killed by colloidal silver - even pathogenic microorganisms that are already immune to antibiotics will die. Worms are also attacked. These dead parasites are then removed from the body and excreted. According to experience, intact skin cells and health promoting bacteria are not affected by the treatment with colloidal silver and healing - the enzymes of beneficial cells remain intact.
However, the method of operation is still not fully understood.
It suppresses, among other things. The histamine and prostaglandin release in allergic and inflammatory reactions;
It absorbs overeating reactions of the immune system and thus alleviates allergic and inflammatory symptoms;
It has a cohesive effect on the wound surface in open wounds and accelerates the healing process considerably. The skin remains elastic and tears noticeably less in mechanically stressed areas;
It reacts in the body like a free radical and binds excess electrons; It supports the detoxification of heavy metal loads.
Silver is not only destructive of anti-life forms, it also supports the formation of vital tissue, so discovered Dr. Robert O. Becker, author of the book The Body Electric and well-known biomedical researcher from the American Syracuse University. Namely, "silver produces a deep healing stimulus for skin and other delicate tissues, unlike any natural process. It greatly promotes bone growth and accelerates the healing of injured tissue by more than fifty percent." Dr. Becker was amazed that colloidal silver promotes a new type of cell growth that looks like the formation of cells in children.
Colloidal silver is superior to conventional antibiotics, efficacy, and cost, and yet it has given way to the medically-produced antibiotic, inter alia. Because it is time-consuming and costly to manufacture!

There is still disagreement between the amount and the concentration of the drug. The only "drawback" would be an overdose of dosage over an extended period of time, since it is then stored in the cells and it is impossible to outsource according to science!
Experience has shown that for most applications, a concentration of approx. 25 - 50 ppm and of this approx. 50 ml and more per day are optimal. Purely theoretically, however, this quantity would have to be much too low in order to achieve the above-mentioned germicidal effect. The fact that it still functions depends on the changed mode of action of colloids.
Furthermore, the ability of water to store and share information (similar to the homeopathic principle) could also play an important role.
Last modification: 16. Feb 2017